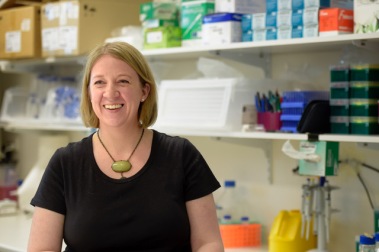 Anne Fletcher is an internationally renowned Fibroblast Immunologist working at Monash University, exploring how fibroblasts can stop cancer patients’ T cells from doing their job and attacking the tumour.  She completed her PhD in Immunology at Monash University, followed by postdoctoral training at Harvard Medical School and the Dana-Farber Cancer Institute, Boston.  She established the Stromal Immunology Laboratory at the University of Birmingham, UK, relocating it to Melbourne in 2017 as a Senior Research Fellow.  Anne has published over 40 scientific papers with >5000 citations and she chairs the Stromal Immunology Network of Australia and New Zealand.

Join us as Anne shares her experiences of courage in her career.

Workplace courage is the ability to work, learn, communicate, and evaluate with honesty and confidence.

The motto at Monash University is “Ancora Imparo” which means “I am still learning.”  I think this perfectly sums up the courage required to perform good science, and the courage that I see around me every day at work. It is always difficult to start a new project or collaboration, as it means starting from a place of ignorance, and finding out what you don’t know, in order to ask the right questions that will extend the boundaries of knowledge.

At any university, the needs of scientific discovery are balanced against the requirements of higher education.

There is courage in my workplace in the ability to give students the managed freedom to try new things or follow a passionate interest, and to forgive them for inevitable mistakes, in order for them to gain their scientific independence.

Science is so competitive, and budgets so tight, that the safest option for any lab head is to micro-manage students, but this doesn’t allow them to reach their full potential.

Leaving Australia to pursue postdoctoral studies in Boston (Dana-Farber Cancer Institute/Harvard Medical School) was the most terrified I’ve ever been. I think I knew one person on the whole continent when I got on that plane. To get myself there, I constantly told myself that I was just trying it out, and that if I didn’t like it, I wasn’t stuck there, I’d just make a new decision and try something else. Luckily it was an amazing experience and a great lab. I had the opportunity to learn and perform fantastic science, I made life-long friends, and I left Boston with a genuine career instead of just the prospect of one.

What helped me the most was my mindset.

I was taking the leap, but at the same time taking pressure off myself by having that plan B in place, and deciding that if it wasn’t a good fit for me I’d move forward without blaming myself or the lab. Looking back, it was quite a healthy approach. I still hyperventilated at 3am most nights leading up to the plane trip though! 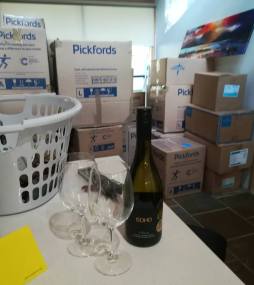 “I moved to Boston with 2 suitcases. This photo was taken 8 years later, moving back to Melbourne with a husband, 2 children, and somewhat more luggage.”

Another instance was approaching my boss and asking for more leadership opportunities. This lead to him suggesting I could take part on the departmental executive board. Once there, I noted to him privately that the gender balance could use some work; I was the only female academic on the board. With his full and unstinting support, the board was shuffled to include 5 more women. It was the first time that board had approached gender parity, and I saw that both my courage to speak up, and his courage to listen openly, without defensiveness, and then follow through, had all contributed to this positive step.

This is certainly my own personal view rather than anything to do with my workplace, but I would like to see Australia’s leaders from any sphere (government, industry, charities and community groups, even families) courageously taking on board the overwhelming scientific consensus regarding the threats of anthropomorphic climate change, even though it is frightening to think about, and to enact forward-thinking policies that reflect the urgency that climate scientists are continually communicating to us.

“My name on a door! Returning to Monash as a laboratory leader was a long-held dream achieved, directly linked to that courageous first
international move.”

Anne was also a participant on the veski STEM sidebyside program in 2018.  I was delighted to hear from her in January, when she informed me that she had been putting courageous strategies into practise and has had interesting results.  One of the strategies Anne shared is that she embraces the adrenaline that she experiences – this is the same adrenaline whether she is feeling fearful or excited – and rather than focus on the fear, she focuses on the exciting part of the experience.  Thanks for sharing your story.